WIKI-Uni-Childcare Centres are part of the tariff system organised by the City of Graz. You need to have your main residence in Graz in order to meet the requirements of the funding guidelines. A non-binding reservation can be made in the first week of March. Parental contributions are staggered according to income. Priority is given to children of employees and students of the University of Graz and employees of University of Music and Performing Arts (KUG).

Please note, that a relation (employment or study) to the University of Graz or KUG does not guarantee admission to the University’s childcare facilities. The allocation of free places is done in accordance to the number of available places.

ABI-Service by the City of Graz supports families with main residence in Graz and informs on available childcare places: abiservice(at)stadt.graz.at, phone 0316/872-7474.

The WIKI-Uni-Kinderkrippe nursery at Heinrichstraße 11 was opened in 2002 and is divided across two storeys, where the children are divided into four groups. There are 10 to 14 children between 0 and 3 years of age in each group. WIKI-Uni-Kinderkrippe is right next to the University of Graz. What makes this nursery special is its wonderfully cosy and toddler-friendly design. The garden in the inner courtyard is specially designed to meet the needs of the children and is a real city oasis.

Since 2016 staff members of our childcare facilities regularly realise small FFG, Talente Regional projects under scientific supervision with several groups of our kindergarten.

Since 2006 the rectorate has financed a flagship project at Gaudeamus Kindergarten called  BRAINTRAIN - unikids fit for life, which provides support for pre-schoolers and helps them to adapt to school as well as possible, something which in turn helps parents to combine work and family life in the long-term.

All childcare centres and schools in Graz

Childminders in Graz and Styria

Childcare in Graz and Styria

Guideline on sabbaticals and leaves (German only) 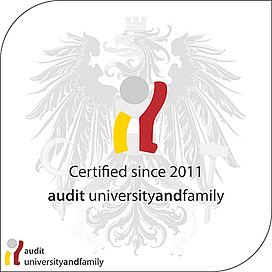